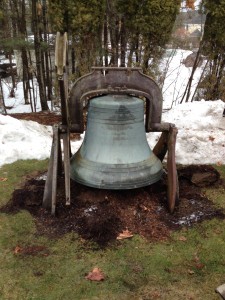 This bell was cast in 1869 by William Blake & Co., which was formerly known as HN Hooper & Co.  William Blake was an apprentice to Paul Revere.  Blake went on to partner with Henry N. Hooper.

This is an impressive bell.  It weighs 1,500 lbs. and has 42″ diameter and sounds great. It still has the original clapper, cast iron yoke, cast iron “A” stands, cast iron wheel.  It needs some restoration.

The bell was retrieved from China Mill in Suncook, NH.  The China Mill pictured below, was a textile mill built in 1860.  In the 1930s, when most textile mills in New England were shutting down or moving to the south due to union battles and the Depression, the China Mill struggled but rebounded. It was sold to a company called Textron, and during World War II, it started pumping out cloth for U.S. Army parachutes. In 1950 it was converted to a furniture manufacturing plant. It has since been turned into condominiums. 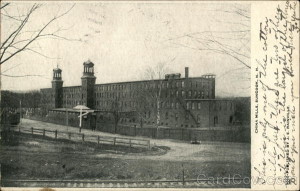 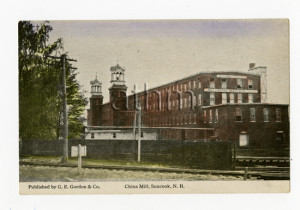