The article below, was also published here at Restoration Trades.

A MAINTENANCE CHECKLIST AND RESEARCH ARCHIVE FOR TOWER BELLS

Part of an 1889 chime of eleven bells at St. Peter’s in Danbury, CT, recently fitted with new electric strikers governed by computer circuitry playing either a programmed score or by keyboard. Photo courtesy of Church Specialties, Inc.

Historic buildings originally lacked most building mechanicals familiar today, but they were often equipped with one mechanical system that performed many modern functions. In their day, tower bells broadcast information about fire safety, public safety, navigation, daily and special events, the time and even played music through systems of varying complexity. While these functions have been superseded by successive waves of technology, the bells themselves remain, frequently neglected or even forgotten. In my own career as a steeplejack, I performed incidental repairs to such bells, supported only by such common sense and mechanical ability as I could command. To discover how to correctly restore or to mechanically upgrade these historic systems, I consulted with a real expert, Joseph P. Duffy, Jr. of Church Specialties, Inc., Monroe, CT, direct heirs to a remarkable legacy of bell making going back over 175 years (see sections below). He asserts that for a bell to give safe, reliable service, it must be free of certain common conditions:

Joe Duffy, Jr. insists that tower bells still play a vital role in defining and building community. A bell, even a single bell, is an enduring musical voice connecting generations across time. The role of the bell hanger is to make sure that that voice rings true to the intent of its maker. Developments in ringing systems including computer circuitry have expanded the range and convenience of ringing options. The easier and safer historic bells can be made to use, the more their voices will be heard. Whether upgrading a 23 bell carillon or restoring a country church bell, Church Specialties has long experience in encouraging the use of bells while honoring and preserving their historic character.

A THIRD GENERATION AT CHURCH SPECIALTIES, INC. CONTINUES TO REPRESENT A TRADITION OF BELL MAKING GOING BACK TO 1825. 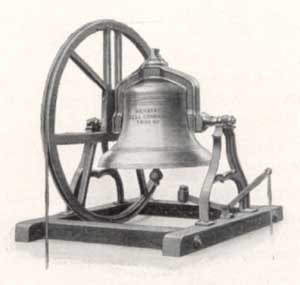 The Duffy family of Church Specialties, Inc. of Monroe, CT has a long history with the Meneely family of bell makers going back to 1919 when thirteen year old Joseph P. Duffy, Sr. began work as a clerk at the Meneely Bell Company’s sales office in New York City. The Meneely companies were several foundries associated with one or another branch of the Meneely family located in Troy or West Troy (Watervliet), NY. In operation from 1825 to 1951, these companies included the Meneely Bell Company, Meneely & Kimberly and Jones & Hitchcock. During this period, they produced a prodigious quantity of bells and shipped them all over the world. Over 6,000 bells were shipped from just one of these companies to New York State alone. By my own unscientific survey of hundreds of belfries, Meneely bells easily outnumber those built by all other bell makers combined, whether operating before, during or since. In time, Joe Duffy, Jr. joined his father in the business and, in 1951, when the last Meneely company ceased operations, the Duffy’s offered their own bell services with the enthusiastic blessing and support of Clinton Meneely, last Vice President of Meneely Bell.

Engraving of a classic Meneely bell as found in thousands of belfries worldwide. The bell is equipped to toll or peal by hand. Courtesy of Church Specialties, Inc.
Their mission was to maintain and restore tower bells drawing on the bell making traditions of over a century and to perform mechanical upgrades to improve operations as new technology became available. This they continue to do under the leadership of a third generation of Duffys including Joe’s son, Joe Duffy, III.

RESEARCH YOUR BELL FROM THE ORIGINAL SHIPPING RECORDS.

Joe Duffy, Jr. is semi-retired but that doesn’t keep him from sharing his encyclopedic knowledge of tower bells with all interested. He may have information about your bell, including name of purchaser, date shipped, weight, cost, musical tone, special equipment furnished, terms, inscription and even installation arrangements.

This information comes from a vast archive of original hand written shipping ledgers going back to 1850 which he inherited from his father, Joe Sr., former manager of the Meneely Bell Company’s sales office. Even if he cannot locate your particular bell, he can refer to a table which will tell you its weight AND tone if given the diameter. Besides this, he possesses a wealth of general information about bell manufacturing, shipping and installation practices. For instance, he says that Meneely never machined its bells for tone as modern bells are. They referred to this practice as “rupturing the bell’s skin” and avoided it. If they were producing a tuned chime of bells and one bell was “off” they sold it as a single and cast a replacement. He can also furnish information about other historic bell manufacturers such as Paul Revere, George Holbrook and Henry Hooper.