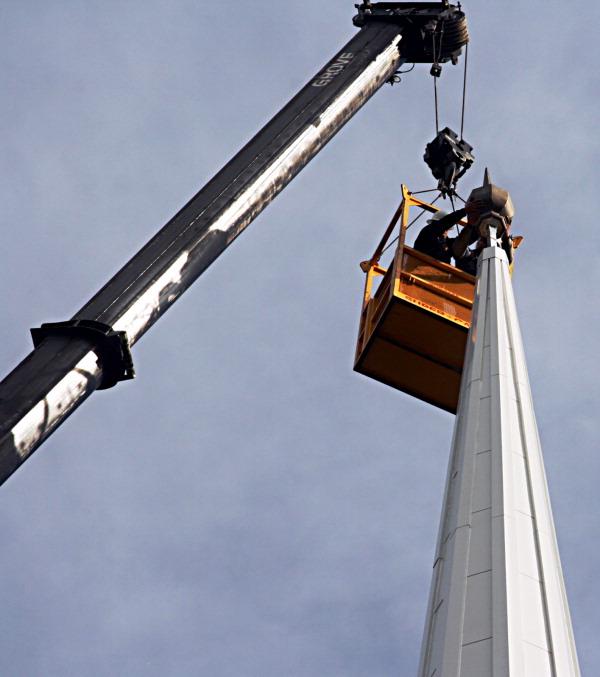 A Steeple for the Ages: Replica of 1855 Icon Completes Village Skyline.

KINGSTON — The iconic steeple atop the Kingston Presbyterian Church is looking better than it has in decades after a makeover with modern materials. 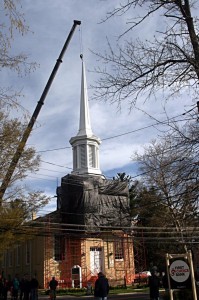 A large crane lifted each of three separate parts consisting of the belfry, spire and finial, Saturday morning as about 20 people watched the installation. “We had the vision for this in 2008,” Steeple Task Force Chairman Brad Clifton said, holding several papers detailing the church’s journey in replacing to top of the building. “In 2008 we began looking at the costs of repairing and maintaining the steeple.” The original steeple was built by hand out of the wood from an old barn in 1855 and has been repaired numerous times during the history of the church.

Mr. Clifton said that workers from as early as 1869 doing the repairs put their names on pieces of the tower. It had undergone major renovations in the 1930s, 1962, and again in 1982, with structural repairs and painting. “We have been overdue (for a renovation),” Mr. Clifton said. “The nails were beginning to come out, we had places where water was getting in.” After looking at the costs of repairs and painting every five years or so, estimated at about $30,000 each time, the task force looked at other alternatives.

Until a couple of years ago, the costs were about the same to replace the steeple as it would have been to maintain the original structure, Mr. Clifton said. Changes in technology and a large gift to the church by the Anderson family, however, made for an opportunity to replace the steeple with one made from aluminum that would last decades without major maintenance requirements.

The church contracted with Campbellsville Industries in Kentucky to build an exact replica of the steeple with modern materials. Incorporated in 1955, the company has become known as “the steeple people” for its work in replicating and building church steeples, classic and modern clock towers, and other similar structures, according to its website. The company built the battlements on the Make A Wish castle in Monroe Township as well as the historic clock tower in Hoboken, according to the company. Mr. Clifton said the new steeple is built to the most current codes and can sustain winds of 100 m.p.h. as well as better lightning protection. 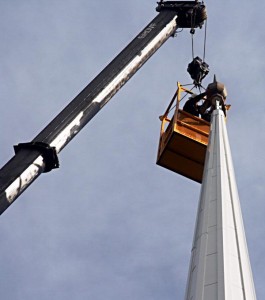 The pieces were brought to Kingston from Kentucky on three big trucks last Thursday and were prepared for Saturday’s raising. Raising the new steeple was completed in three phases. The belfry was put in place around 6 a.m., the spire around 8 a.m., and the finial around 9 a.m. Each section was put in place in about 6-10 minutes once the crane started lifting it.

Mr. Clifton said the total cost for the project is $260,000, of which, the church has raised some 87 percent with about $33,000 still needed to finish the work. While the initial cost for the installation is higher, the ongoing costs drop with only power washing needed for the next several decades, he said. Pastor Sharyl Dixon said that the new steeple shows a good stewardship of the congregation’s money and will allow the church to concentrate on its mission. “In a lot of older churches, the building becomes an albatross around its neck,” Pastor Dixon said as she looked up while the new spire was secured into place. “We’re not going to spend tons of money (fixing the old structure), we are going to go out and do the ministry we are called to do. It’s a new chapter in a faithful and long, long, history in this community.”

Ms. Dixon said the congregation is currently about 150 and that people come from throughout the region to be part of the fellowship at the church. “We are not big, but we are mighty,” she said. The church was established in 1723 in a log building on the Millstone River, according to its website. After burning down in 1791, a frame structure on the same foundation in the cemetery was used until the present building on Route 27 was erected in 1852.